Naturism in Croatia and Dubrovnik

Naturism is the simplest form of living and being in harmony with nature. This free-body society requires one to continuously take care of the relationship and well-balanced coexistence with nature and nudism.

The respect to nudism in a natural surroundings raises the responsibility towards one's self, other people and in the end the whole milieu. Croatia was actually among the first European country to open its borders to naturist centres and naturists as early as in 1953.

The feeling of welfare, freedom and the opinions associated with enlightening the knowledge of one's body are particular brought to perfection in the natural retreat of Croatia, located in the most beautiful areas, perfectly placed in nature and well developed, spreading from Savudrija to Dubrovnik. 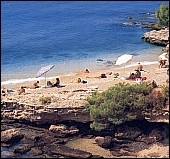 In search of commitments and challenges in the natural art of living, naturism believers are a bit more demanding than normal tourists. They look and expect far higher quality of basic tourist service in the naturist centres. To live together naked in a resort does not just involve naturist membership, it does also imply the understanding of the elements as sun, air and water. The best way to experience a holiday in a natural setting and environment is achieved by physical and mental balance done in sports, healthy eating and the development of creativity.

A life philosophy as this requires specially adapted centres together with total tranquillity, faultless hygiene and up to standard tourists services. The so-called "free nudist beaches" have not been registered as such and at the moment are considered free bathing areas, being partly under the control of local Tourism Associations, and nude sunbathing on these is " tolerated " and hardly ever forbidden.

Dubrovnik is situated in the south of the Adriatic coastline, and it is considered as the main capital of the Dubrovnik-Neretva county. Dubrovnik is proud over its warm climate and over 2.600 sunshine hours per year. The vegetation is mainly lush-sub tropical together with olives, wine producing, almonds and citrus fruits.

The beaches for naturists of the Dubrovnik-Neretva county are mainly located close to the islands and tourist centres. In the Dubrovnik area the most common and well-known naturist beaches are on the island of Lokrum and on the Island Lopud, the beach Sunj, the nearby beach to hotel Dubrovnik Palace Hotel. The island Kolocep southwest of Donje Celo town also has a naturist beach.