A holiday of light and rapture 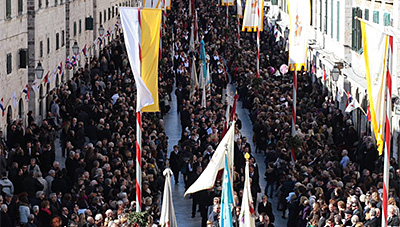 The celebrations of St. Blaise have remained the most festive and the most sublime day in the long history of Dubrovnik, a true summary of the Croatian past of the local land, a spiritual and religious unification of the City and the countryside into one inseparable whole, a historic symbol of religious, civil and popular spirit, an expression of gratitude to the saint-martyr, the protector of every subject.

Over the thousand years, the celebrations have changed by becoming more unique, amalgamating the change with the stability of the customary, yet constantly proving how St. Blaise is woven into every pore of life and how to honour him means to express freedom LIBERTAS. January 30 is the first day of the three-day prayers in the Saint's church, while the earliest documents illustrating the opening of the Celebrations of St. Blaise on Candle Mass, February 2, on the holiday of light, in Dubrovnik called 'Kandelora', come to us from the I5th century. The tradition lives on. The banners of all the parishes gather up in early afternoon to the music of all the bells, the banner with the figure of St. Blaise is hoisted on Orlando's Column. A "Laus" (well-wishing prayer) is said, girls in traditional costumes offer the fruits of the land symbolizing the I2 months in yet another year of abundance. The bars of the Saint's hymn resounding, the scent of the laurel and the candles, the flight of the white pigeons of peace and the rapture of the congregation exalt the solemnity of the opening of the Celebrations.

Dear, fellow citizens and dear visitors, take part in our first winter festival. Let us fulfil together the vision of Dubrovnik, the city for all four seasons.

A modest meal for reflection

Many nice local customs adding to a special atmosphere are linked to Kandelora. Festive lunch has been the gathering point to all, always to the same meal consisting of a plate of macaroni with minced meat sauce and the special doughnuts "hrostule"', followed by a sip of good wine. The table is festive, however modest, calling upon the traditions of giving the bread to the poor, as used to be done by the municipal government, a custom allegedly based upon a recommendation by the Saint himself: at his years of imprisonment under the Roman governor Agricolaus in Sebasta, an impoverished widow to whom Saint Blaise had saved a pig by miracle, visited the Saint in prison, bringing him some modest meal and a candle to give him some light in his prison cell. The Saint thanked the widow, tasted the food, uttered the prophecy of his martyrdom and death, and asked her to keep giving to the poor for as long as she lived, promising God's blessing to her poverty. That is one of the legends of Dubrovnik's saint-protector. We wish to add that the macaroni with minced meat sauce are a modest dish, with little sauce and even less meat. The meal is known as "dirty macaroni" which, sometimes, can be "very dirty" (i.e. with lots of meat and sauce. Well, it is holiday, isn't it?

Candle Mass (Kandelora) therefore is a becoming introduction to the Holiday of St. Blaise (February 3), the holiday which occurs once every year, with majestic processions, calls and waving banners, church bells, the shots of the fusiliers and the thrilling hymn to the Saint. All within the unique setting of Dubrovnik, the eternal stage to the Celebrations appearing as a collection of miraculous images that have sailed in from the inexhaustibly rich history of this City.

Good to know facts about The Festival of St Blaise

Ever since the year 972, when people began to celebrate it, the feast day of St Blaise, Dubrovnik patron saint, has been a quite special festival, typical of Dubrovnik.

So, if you are around don't miss the opportunity to be in the Old Town Dubrovnik to participate in this memorable event.

Last update: 11.5.2017
We hope that you found the information on Dubrovnik Online to be useful. If so, please help spread the word.